Skip to Main Content
It looks like you're using Internet Explorer 11 or older. This website works best with modern browsers such as the latest versions of Chrome, Firefox, Safari, and Edge. If you continue with this browser, you may see unexpected results.

This research guide was created in 2022 by Annalise Welte and is managed by Getty Library Staff.

This guide is a work in progress. Additional links and information will be added over time.

Please send any additions, corrections, or other suggestions for this research guide to reference@getty.edu. 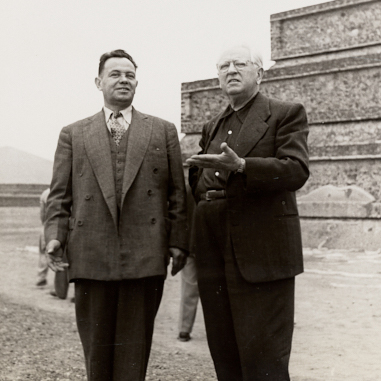 About this Research Guide

This guide presents a selection of annotated letters between Earl Stendahl and Guillermo Echániz regarding the clandestine extraction of murals from Teotihuacan, with additional biographical notes on recurring figures who appear in the letters.

Teotihuacan Murals and the Mid-Century Market for Pre-Hispanic Art

Art provenance research, and the transparency and accountability it implies, is of ever-increasing importance to museums and private collections that hold objects that may be marked by colonial enterprises or illicit trade. This field is also of interest to an array of stakeholders and publics who want to know where the objects originated; the context of their production; the circumstances of their removal; and the networks that brought them to exhibition halls, storage vaults, art galleries, auction houses, and private homes. Such works include 6th-century CE murals that were clandestinely extracted from the ancient metropolis of Teotihuacan, located in central Mexico, and illicitly exported c. 1940–42 to the United States by Earl Stendahl (1888–1966), an art dealer based in Los Angeles, and Guillermo Echániz (1900–1965), a commercial bookseller and antiquarian based in Mexico City. These murals, whose removal from the site and from Mexico was decried in the Mexican press even as they were mounted on walls abroad, are at the center of the selection of letters presented, contextualized, and annotated for this Research Guide: a public-facing introduction to the work of the Getty Research Institute in pre-Hispanic art provenance. This Research Guide also supports the second international symposium of the Pre-Hispanic Art Provenance Initiative (PHAPI), Collecting Mesoamerican Art, 1940–1968: Forging a Market in the United States and Mexico, and its closing address, “The Teotihuacan Proposition: or, How a Wall Painting Became a Painting on a Wall,” by Mary Miller, Megan O’Neil, and Matthew Robb.

While correspondence surrounding the murals looted from Teotihuacan is the focus of this Research Guide, these objects represent a minute fraction of the materials that Stendahl and Echániz handled during their partnership. From the mid-1930s through the mid-1950s, the pair brought unprecedented quantities of pre-Hispanic objects to market by actively identifying and acquiring items from archaeological sites and private collections in Mexico, and ardently cultivating clientele for those objects abroad. Stendahl and Echániz did not create the international market for pre-Hispanic objects, but they molded it to suit their business interests, de-centering western Europe in favor of North America as its hub, fanning the appetites and shaping the tastes of both institutional and individual collectors, and ultimately transforming the ways that these materials were consumed and commodified in the 20th century: not simply as artifacts, but as art. These processes are evident in their correspondence, and elucidated by additional materials in the Stendahl Art Galleries Records.

The Stendahl Art Galleries Records (2017.M.38) housed in the Getty Research Institute’s Special Collections offer an extraordinary and often troubling view into the commodification of pre-Hispanic material culture in the 20th century. The archive’s 40 linear feet (consisting of 128 boxes, two film reels, and four flat files) contain business and personal documents from the mid-1930s to the Galleries’ closure in 2017, with the majority of the documents created during the earlier years of the business and primarily related to pre-Hispanic art. These include gallery stock books, inventory cards, customs documents, photographs, exhibition catalogs, newspaper clippings, and letters exchanged among Stendahl family members and with collectors, museums, and other dealers. Another set of materials related primarily to the Galleries’ business in American and European art entered the Smithsonian Institution’s Archives of American Art in 1976, and are available on microfilm at four other institutions.

In closing the Galleries after nearly a century of business, Ron Dammann, grandson of Earl Stendahl, and his wife April Dammann, realized that the records they had preserved could hold value for researchers and began conversations with GRI staff members, including Joanne Pillsbury, regarding their preservation. They also shared the archive with scholars Megan O’Neil and Matthew Robb who, because of their specialized interests in the history of collecting pre-Hispanic art, recognized the enormous potential and challenges posed by the scope and content of the material. Together with former GRI Director Thomas W. Gaehtgens and GRI staff members Marcia Reed, Idurre Alonso, and Kim Richter, all parties agreed that the Stendahl Galleries story was both a Los Angeles story and an important chapter in the history of provenance research, and thus that the GRI was an ideal repository for this history.

The acquisition of the Stendahl Art Galleries Records also provided the institutional impetus for the GRI’s Pre-Hispanic Art Provenance Initiative (PHAPI), envisioned by current GRI director Mary E. Miller, launching the first systematic study of how the corpus of, and market for, pre-Hispanic art took shape in North America and Europe beginning in the late 1930s. PHAPI seeks to make a foundational contribution to the study and preservation of Mesoamerican cultural heritage by conducting multidisciplinary analyses of the Stendahl Art Galleries Records, exchanging information with other research and collecting institutions, and disseminating the results of the PHAPI provenance studies.

Harmful Language in the Archive

There is harmful, biased, and distorted language in some of the documents included in the Stendahl Art Galleries Records, and the correspondence between Earl Stendahl and Guillermo Echániz is no exception. There are also various forms of erasure at work, particularly around Indigenous ownership and agency. Please see the Getty Research Institute’s Anti-Racist Statement regarding harmful language in archival documents and images, and in their bibliographic descriptions.

The Stendahl Gallery Records are held at the Getty Library and can be viewed with a Special Collections Reading Room appointment. The Library is open Monday to Friday, 9:30am to 5pm, by appointment to registered Readers and new researchers. Capacity is limited. Library users must comply with the Library's COVID-19 policies, including being fully vaccinated by the date of your appointment.